The Bull Man of San Pedro 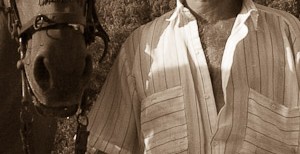 There are so many reasons I´m glad I moved away from the UK. For one, I love the approach toward home after work, the mountains to the right, the sea to the left.

At around 3pm as I drive over the river bed also see Juan and his herd of bulls grazing in and around the Rio Verde.

Back in 2008 I went on a little walk to take photos just near here, hunting out streams in the river bed after a large rain fall. I was deep in the undergrowth, jumping on natural stepping stones in amongst the marshes. I kept finding more and more photographic opportunities, having a great time.

The sound of rustling and the snapping of twigs stopped me instantly. I looked round to get my bearings, and realised my worst fear what looked like at the time to be hundreds of young bulls heading toward me…. so far oblivious to my presence.

I think I am allowed to say that I was absolutely petrified, my skinny legs were shaking, death was coming my way.

I frantically considered my options, I had none! I was trapped!

Contemplating chucking the camera and swimming for it, I hovered about not knowing what the f to do.

When out of nowhere appeared my local hero!! Juan the Bullman, or Bullman as he was known to me then who pulled me to safety with his rather handy pole.

Now none of that would have happened if I lived in London would it!

Juan the Bullman with his horse!

Why go anywhere else? Puerto Banus

Why go anywhere else?

This website uses cookies to improve your experience while you navigate through the website. Out of these, the cookies that are categorized as necessary are stored on your browser as they are essential for the working of basic functionalities of the website. We also use third-party cookies that help us analyze and understand how you use this website. These cookies will be stored in your browser only with your consent. You also have the option to opt-out of these cookies. But opting out of some of these cookies may affect your browsing experience.
Necessary Always Enabled
Necessary cookies are absolutely essential for the website to function properly. This category only includes cookies that ensures basic functionalities and security features of the website. These cookies do not store any personal information.
Non-necessary
Any cookies that may not be particularly necessary for the website to function and is used specifically to collect user personal data via analytics, ads, other embedded contents are termed as non-necessary cookies. It is mandatory to procure user consent prior to running these cookies on your website.
SAVE & ACCEPT